Nestling at the foot of a steep rock and beautifully surrounded by the sea lies the traditional settlement of Líndos; on the top of the same rock stands a centuries-old acropolis, proudly overlooking the archipelagos. The acropolis bears silent witness to Líndos’ glorious past, a major naval power of ancient times which reputedly had a population of 17,000. The landscape of Líndos encapsulates the essence of Rhodes: a surprisingly felicitous blend of ancient and medieval! With 600,000 visitors annually, Líndos competes with Delphi as the second most visited archeological site in Greece. Enjoy it!

Things to do in Lindos 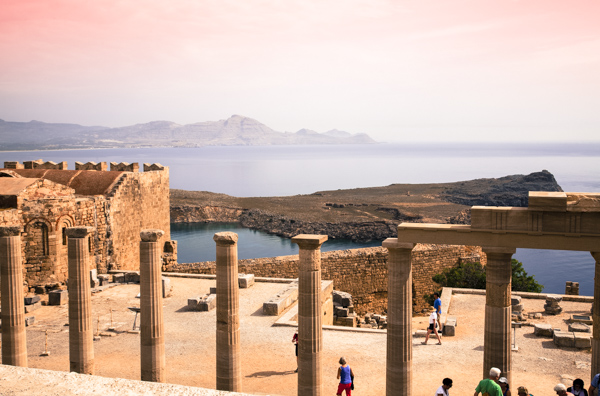 The Acropolis of Lindos is one of the top things to do in Lindos. We walked up the stone path to the site. It only took about 20 minutes and we were going quite slow to soak in the views that just keep getting better as you go up.
At the top, there are many monuments to look out for behind the Medieval walls: 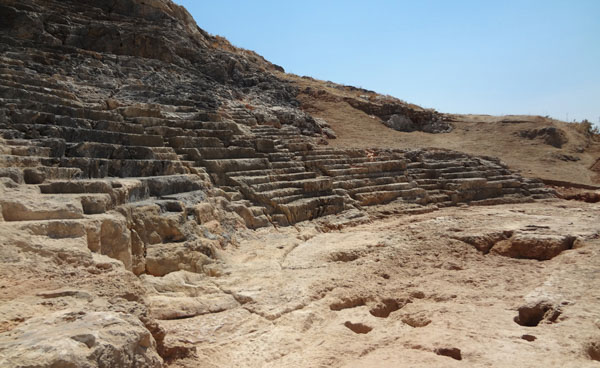 The ancient theatre of Lindos

The ancient theatre of Lindos lies at the foot of the west slope of the rock of the Lindos acropolis. The cavea was divided into nine cunei separated by eight narrow staircases. It had 19 rows of seats, most of them carved into the rock although somewere built, as were the  endmost cunei and  the side retaining walls, which  do  not survive.

The staircases led to a passageway 2.15 m wide, above which lies the upper cavea with six rows of seats. Access to the upper cavea, 1.90 m higher, was by two narrow staircases with eight steps, carved into the vertical rock face. The upper cavea is more steeply inclined, in order to provide even the non-privileged spectators with a good   view.  The  upper  edge   of   the  cavea   is   also   delimited  by  a  vertically-carved rock face, 2.70 m high. A rocky projection corresponding to the centre of the cunei may have served as the base of a choregic monument.

Today only the rock-carved sections are preserved: the circular orchestra, the three central cunei of the lower cavea and parts of the two neighbouring ones, and the central section of the upper cavea.  The orchestra of the theatre is circular, also carved into the rock. Around it runs as lightly raised border, 50 cm wide, probably intended to prevent rainwater flooding the orchestra as there was no drainage duct.

The theatre of Lindos is dated to the 4th c. BC and had a capacity of 1,800-2,000 spectators. It is connected to the great city festivals in honour of Dionysos, the Sminthia, which included theatrical, musical and athletic competitions, processions and sacrifices. In the 3rd c. BC, directly adjacent to the theatre was built the Tetrastoon, a rectangular building with an internal colonnade, perhaps a sanctuary of Dionysos Smintheus. 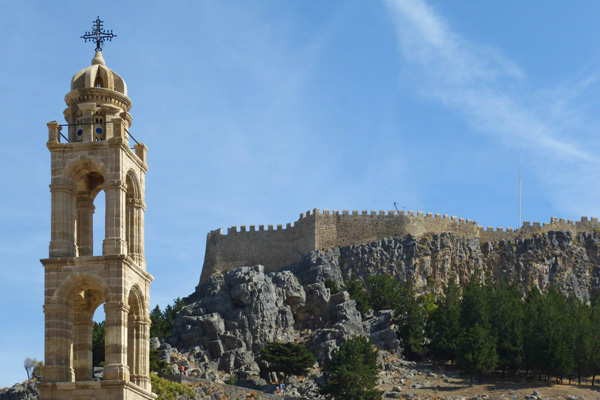 Originally built in 1300, the Church of Panagia is known for its high-rise, stone campanile tower, typical of Dodecanese churches. Inside, there are 19th century wall frescoes depicting biblical scenes. Located in the village of Lindos.

Relax at a Lindos Beach 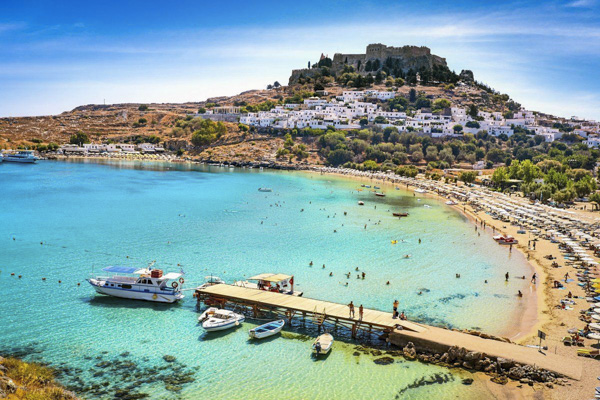 Going to the beach is one of the top things to do in Lindos.

Lindos Beach, also known as the Main Beach (Megali Paralia), is located east of the Acropolis. It is sandy with shallow water, making it a perfect swimming spot for kids. On the western tip of the bay is the smaller, taverna fringed Pallas Beach. 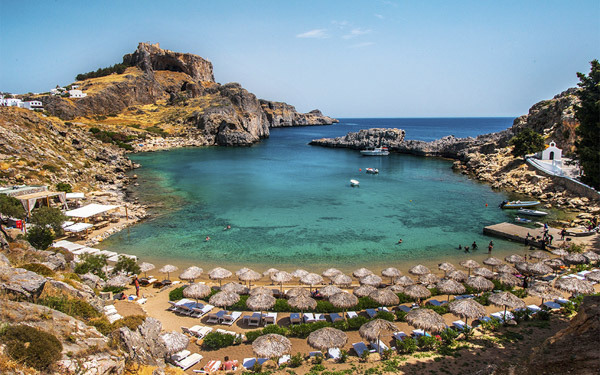 St Paul’s Bay, below the acropolis of Lindos, is a stunning place for a swim.
A 10-minute walk from town to the western side of the Acropolis gets you to this stunning sheltered bay called St Paul’s. Its shape and its beautiful turquoise water will make your heart ache.
The view in all directions is amazing. To the south is the beach of St. Paul, the second ancient natural port, which, from above, looks like a swimming pool. The Apostle Paul is said to have landed here, bringing Christianity.

The beach is among the most popular on the island, and the forecourt of its small Byzantine church is a frequent wedding spot for foreigners. To the east, there are impressive cliffs; to the north, the beach of Megalos Yialos. For most people, however, it is enough to sit on the steps of the Hellenistic stoa, in the shade of the columns. The breeze that usually blows here offers a welcome respite from the heat. 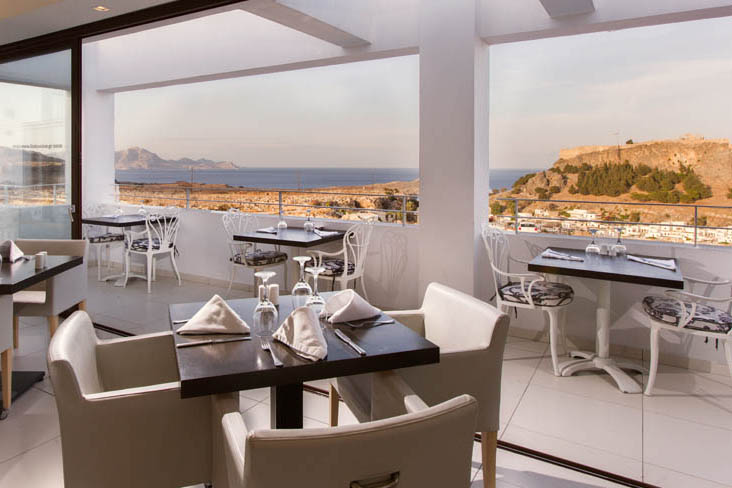 Greece is widely known for its rich gastronomic heritage while Greeks have always been valuing the food and giving great attention to its preparation and even greater care to the quality of the products they use. Therefore, the food in Greece is the way to feel, discover and understand this culture. 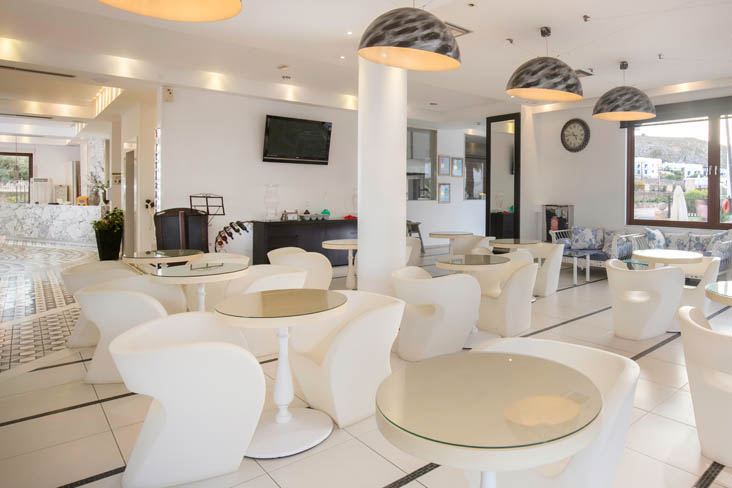 Snack bar of the Lindos View Hotel offers breakfast and snack menu as well as variety of drinks and a cocktail menu. It is a great place to have a casual meal and relax in an informal environment.